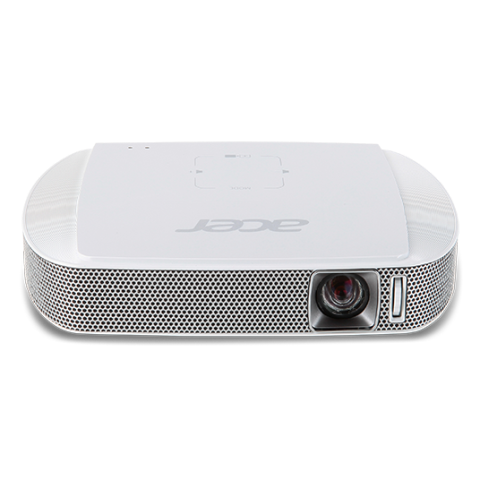 Acer, the world’s No. 3 brand for projectors worldwide in 20141 , announces that the Acer C205 LED projector has been chosen for the iF Design Award 2015 of Germany. This exceptionally light and portable projector with wireless projection capabilities was chosen from among 5,000 entries from 53 countries and awarded in the audio/video category.

Whether for business or personal use, the Acer C205 is ideal for people who want to be able to project on the move. It carries a small foot print of just 144 x 108 mm and weighs a mere 0.3 kg (0.66 lb), making it a great companion for mobile devices. It can also work cable-free with a built-in battery design. The operating time of the projector can be extended to up to 7 hours with Acer Power Bank.

Customers can project photos, music and video from any smart device with HDMI or MHL cables, with the MHL port also permitting devices2 to charge simultaneously. In addition, the Acer WirelessCast (MHL adapter) allows the C205 to wirelessly project content from smartphones, tablets3, and PCs.

The C205 LED projector offers a high brightness of 200 lumens and a fine contrast ratio that provides clear graphics and beautifully vivid colors. With powerful 2 x 2W speakers this projector delivers impressive sound to match the visuals, offering customers cinema-like movie experiences anywhere. The C205 also has a long LED lifespan up to 30,000 hours4 that helps to reduce maintenance costs.

The C205 LED projector is the latest addition to Acer’s acclaimed projector lineup. Recently, Acer was voted South Africa’s favorite projector brand at the 2014 Channelwise Awards by Channelwise magazine, a leading IT trade magazine in South Africa. In 2014 Acer was also awarded the Leser Award (Readers’ Award) in Germany for projectors; this award program was jointly hosted by Screen Magazine, n-tv and the German Institute of Service Quality (DISQ).