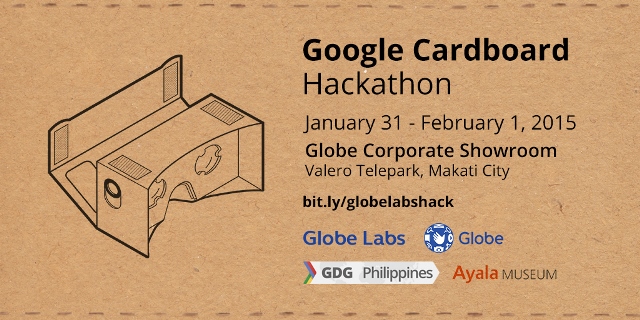 Globe Labs, in partnership with Google Development Group (GDG) Philippines, takes advantage of the growing popularity of Google Cardboard, the latest trend in virtual reality, as it challenges the local developer community to create fun and simple apps for an immersive user experience.

With the 24-hour Google Cardboard hackathon slated on January 31-February 1, Globe Labs expects interesting apps to come out in the areas of education, travel/culture, gaming, and retail.

“This is a great way to start the year and we’re excited about holding the first Google Cardboard hackathon in the Philippines. We look forward to the apps that our developer community will create for Google Cardboard which may eventually be adopted by Globe Telecom for its millions of customers who want a new virtual reality experience with a lifestyle that has gone more digital,” said Anne Michelle Santos, Globe Labs developer relations manager.

Using ordinary items such as a fold-out cardboard, lenses, magnets, Velcro, and a rubber band or a ready-made Cardboard viewer kit, developers are on their way towards a 3D journey which will make the tech-hungry population demand for more.

For the Google Cardboard to work, the viewer kits are fitted with a smartphone with stereoscopic display that allows users to view the images in 3D mode. Existing apps already bring the viewers inside the Shire, let them dive from a skyscraper, watch musical legend Paul McCartney perform “Live and Let Die” in 360 degrees, or even ride a deserted roller-coaster amidst a tropical island.

Meanwhile, individuals or groups of four members who could create marketing, games, or educational app for the Ayala Museum have a chance to win P35,000 under a special category. Apps will be judged based on innovation, design, level of fun, completeness, and presentation.

The Globe Labs Google Cardboard Hackathon will be held at the Globe Corporate Showroom in Valero St., Makati City. There will also be a Google Cardboard 101 pre-hackathon on January 21 in the same venue to give the developers a chance to try out the Google Cardboard. Interest participants may register via bit.ly/globelabshack.