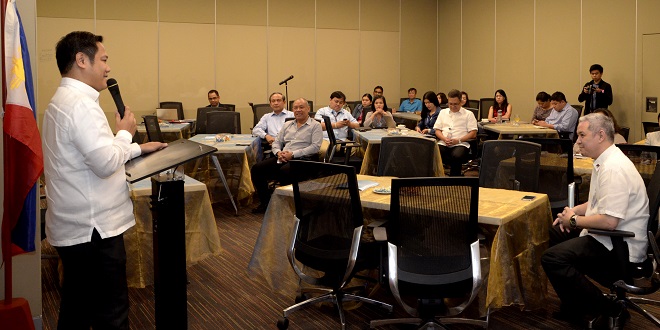 Globe Telecom recently hosted a day-long briefing and training session on private-public partnerships (PPP) last March 23 at the Globe Tower, the first ever gathering conducted by the PPP Center for the private sector.

To understand and appreciate the entire PPP program, employees of the company, particularly those from the Finance, Legal, Treasury, Taxation, Globe Business Enterprise and IT-Enabled Services Groups which are directly involved in the different stages of preparing for bids to the government, were provided the knowledge and skills on PPP processes and recent developments. Their participation will empower the company to be fully equipped and ready should opportunities to bid on government projects arise.

“Globe has been an active participant in several PPP infrastructure projects. We decided to hold this primarily because of our faith in this administration, and as we drive improved governance in this country,” said Globe president & CEO Ernest Cu.

He added that one of the mandates by Globe senior leadership to the eGov team on the projects which the telco participates and engages in should be “successful and commercially viable for Globe.” “Our primary intent is to assist the government and ensure that the proper governance as well as systems are in place. This would enable the tenets that this administration have implemented, and that they would last beyond the current one.”

Globe Chief Operating Officer Gil Genio meanwhile pointed out that, “we have been successful in a few government ICT-type projects, the most important one being the Philippine government electronic procurement system or PhilGEPS, among others. These are undertakings that we want to support in the long run as they are all important for Globe, our government, and the Filipino people.”

Deputy Executive Director Eleazar “Ely” Ricote formally opened the sessions by saying that the PPP is one of the banner programs of this administration. “It has been making significant inroads so far. The challenge is how to make it sustainable and proceed given a huge pipeline of projects.”

“Compared with its neighbors in the region, the Philippines is the only country where its constitution stipulates that the private sector will be the state’s partner in development. Aside from corporate social responsibility (CSR), we have a mandate to help the government in traditional and infrastructure projects,” he noted.

For several years, Globe has been supporting the government’s policy of increasing private-sector participation in development projects by way of its Enterprise Group, Small and Medium Business Group, GCash operator G-Xchange, Inc. and the CSR Department, in the same way that its parent company Ayala Corporation backs the government and participates in PPP projects. All these are in line with the PPP Center’s objective, which has given seminars and briefings to national government agencies as well as local government units. After Globe, the PPP Center is looking to conduct similar trainings for other Ayala companies.