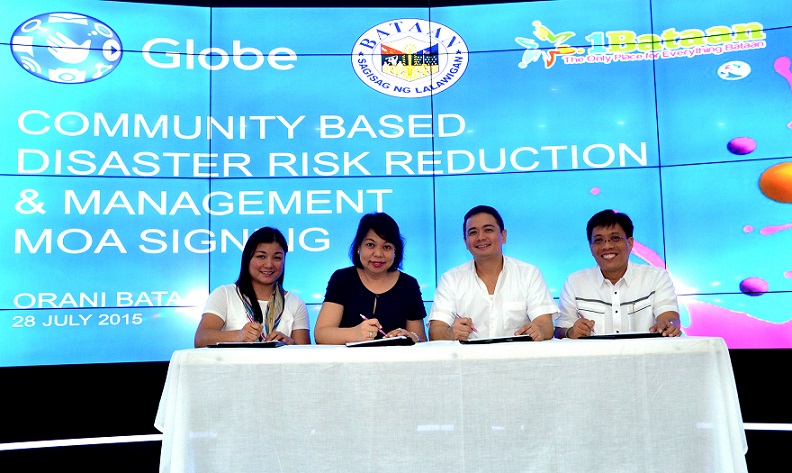 Philippines’ number one mobile brand Globe Telecom partnered with the Provincial Government of Bataan for the launch of the Community Based Disaster Risk Reduction and Management Program, which aims to provide Information and Communications Technology (ICT) support to the Bataan government through its Metro Bataan Development Authority (MBDA).

The MBDA, which functions as a policy maker, coordination and enforcement agency relating to traffic laws, and heads all provincial efforts during times of disaster, was given the SMS Broadcast facility called Txt Connect, which would enable the Governor or the head of the MBDA have direct contact with the different local government and barangay leaders to help provide relevant and critical information in emergencies and disasters.

Globe, through its partnership with Weather Philippines will also conduct Weather 101 as well as a series of community based Disaster Risk Reduction and Management (DRRM) trainings targeting DRRM officers and barangay officials. The trainings will provide basic knowledge on emergency procedures and basic first aid to the barangay officials who act as first responders in the community.

“Globe has always been a reliable partner in ensuring that communities are ready, responsive and resilient in times of disaster. This partnership with the provincial government of Bataan enables the leadership down to the first responders the ability to have effective communication, which is vital in disaster and crisis mitigation,” said Globe Senior Vice President for Corporate Communications Yoly Crisanto.

Each barangay will also be given Sim Cards that are included in the Txt Connect database, which will be distributed to barangay officials for easy coordination. Participating officials will also receive equipment for rescue efforts of locals.

“The safety of the citizens of Bataan is our outmost priority when it comes to emergencies and disasters. Our efforts in providing excellent service will be enhanced with this partnership. In behalf of the provincial government of Bataan and my fellow Bataeños, we’d like to thank Globe for providing us the necessary tools for disaster preparedness,” said Bataan Provincial Governor Albert Garcia.

The MOA signing was held at the 1Bataan command center in Orani, Bataan, the official MBDA operations center.