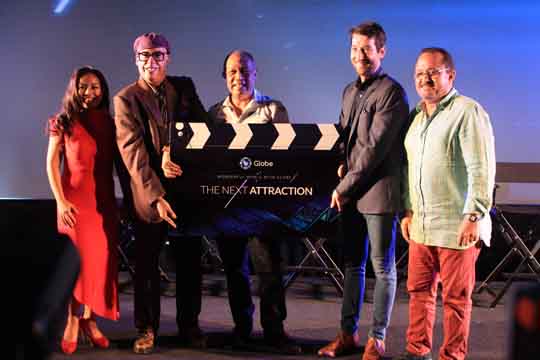 The country’s number one mobile brand, Globe Telecom, is changing the landscape of Philippine entertainment with the creation of Globe Studios and Globe Live which are designed to produce original shows, live events, and engaging world-class content that are fit for today’s discerning customers.

At the same time, Globe reveals the line-up of its new international content partners and improved broadband plans for a complete and immersive entertainment lifestyle.

Nowadays, dramas and movies are no longer confined to television and cinema as they can already be shared through social media via mobile phones. Globe Studios recognizes this and thus, brings the next generation of entertainment to mobile with original video productions from top film directors such as Erik Matti, Paul Soriano, Quark Henares, Dan Villegas, Sigrid Bernardo, Joyce Bernal, and Lav Diaz. Globe Studios is backed by local and Asian media houses such as Viva Films, Reality Entertainment, Quantum Films, Spring Films and Astro of Malaysia.

“Consumption of mobile entertainment has grown exponentially over the past years. Today, customers no longer wait for their favorite shows on their TV screens. Instead, they dictate what they want to watch when and where they want to. With Globe Studios, we will now produce our own clips, series and even movies. Backed up with the biggest director partners and entertainment companies in the industry, we are set to show what customers want today,” said Albert de Larrazabal, Globe Chief Commercial Officer.

On the other hand, due to the rising clamor towards personalization, another challenge is how to deliver the most engaging and creative events that will satisfy customers. Globe Live responds to this demand by leveraging on Globe Telecom’s wide experience in the live events industry to elevate production quality and at the same time, tap the wide distribution coverage of Globe to promote and assemble events that are of international size and quality.

“The caliber of events will forever change with Globe Live. We can now produce shows and events that are world-class, unique to customers and more accessible. Our years of experience in the industry added with our edge as a telco company will bring perfect partnerships to bring wonderful events to our customers,” said Joe Caliro, head of Globe Live and Globe Retail and Transformation Management.

Globe Live’s first foray in the theatrical scene is the staging of Green Day’s American Idiot, a Philippine production of the hit Broadway musical. Produced together with 9 Works Theatrical, American Idiot will be held at the new Globe Iconic Store in Bonifacio High Street Amphitheater in Bonifacio Global City, Taguig which features two massive Times Square-like LED walls in a unique outdoor setup to accommodate thousands of people. American Idiot is composed of a star-studded talent roster headlined by Basti Artadi of Wolfgang, Miggy Chavez of Chicosci, former Rivermaya vocalists Jason Fernandez and Norby David, and veteran thespian Nel Gomez. The show is set to run from June 24 until July 10, 2016.