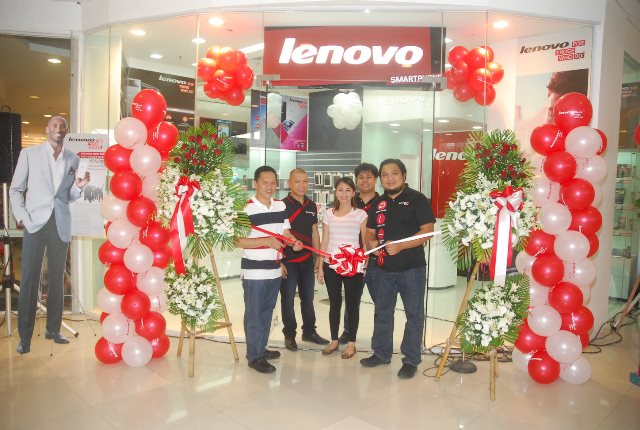 The newly opened store, which is the third LMES in Davao City alone, is operated by Banana Telecommunications Inc., located at the 3rd floor, Gaisano Mall, Tagum, Davao. The first concept store opened in October last year in Gaisano Mall, Davao and the second store opened middle of this year in Abreeza Mall, Davao.

Michael Ngan, Country General Manager of Lenovo Philippines, recognizes the increasing demand for smartphones all over the country since 2011. “Davao continues to be Mindanao’s top economy, with a sustained growth in its gross regional domestic product (GRDP) since 2012. We are proud that Lenovo has been one of the first brands to tap this robust market, in lieu with our strong commitment to providing Filipinos powerful smartphones as we strengthen Lenovo’s presence in the Mindanao Region.”

The National Economic Development Authority (NEDA) confirms that Davao has landed the fourth in the country in terms of the Philippines’ gross domestic product, having 3.5% share. It remains to be one of the richest cities in the Philippines outside of Metro Cebu and Metro Manila. Named by the Foreign Direct Magazine as the 10th “Asian City of the Future,” Davao City has been the center of trade, businesses and economic activities in the region, with a lot of investments continuously pouring in.

The demand for affordable smartphones has been increasing because of mobile data and social networking. Based on a report by Tigercub Digital, Internet access grew by over 500% since 2008. Smartphone penetration is expected to hit at 50% next year due to the availability of the Internet according OnDemand Research.

Lenovo Mobile Country Head, Dino Romano said, “The Philippines is an important market for Lenovo because we have seen a significant and steady increase in local smartphone shipments. Through the continuous expansion of our LMES in the country, we are reaching out to Philippine consumers, especially the younger segment of the population, whose lifestyle demands for high-performing and reliable mobile devices.”

The concept store houses a wide range of Lenovo smartphones to address the needs of the region. The Lenovo Vibe Series is currently the brand’s top-of-the-line products for executives doing business in Davao. The Lenovo DOIt applications namely SYNCit, SHAREit, SECUREit, SNAPit and SEEit are the perfect complement to Lenovo smartphones that allow users to perform several tasks efficiently and easily.

Meanwhile, the Lenovo A Series are a wide range of products powered by dual and quad core processors running on Android Jellybean 2.0 for the budget-conscious consumers who would like to own a smartphone or for the youth, who wants to be connected 24/7.