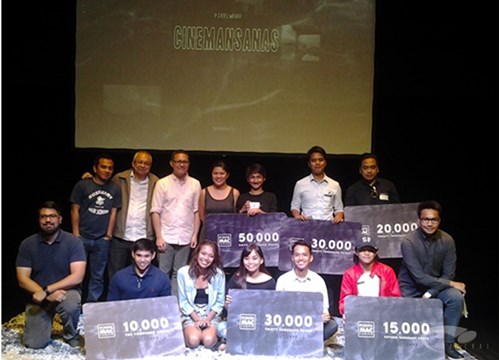 The event brought together premier figures in the film industry and designated Pixelworx brand ambassadors – independent filmmakers Mario Cornejo and Monster Jimenez, seasoned director Yam Laranas, and multi-awarded author and screenwriter Ricky Lee – who served as judges for the competition. In the past months, they also spearheaded a series of workshops in film production, cinematography, direction, editing, and sriptwriting to assist contenders in crafting their masterpieces. This was supported by tutorials for iMovie, GarageBand, and Final Cut Pro X. “The entries for this year’s Pixelworx competition showcase the talent and resourcefulness of Filipino artists. We are honored to introduce the visual storytellers who truly rose up to our challenge of filmmaking using Apple devices only,” said Marketing Director Joey Alvarez.

Winners took home up to Php50,000 worth of PowerMac Center Gift Cards each. The Diamond Award winners in both student and professional categories also got the chance to have their films screened during the program. PowerMac Center has also opened online voting for the Pixelworx People’s Choice Award. All entries that made it to the finals were uploaded in the PowerMac Center YouTube channel. The entry with the most number of likes by May 19, 2016 wins. It will be announced online on May 20.

Cinemansanas is the second installment of Pixelworx, PowerMac Center’s advocacy of recognizing artists who break the standards of the art scene. It is celebrated with a series of workshops, live demos, and an ultimate art challenge.

Next Post Globe Telecom to Offer iPhone SE in the Philippines starting May 16, 2016