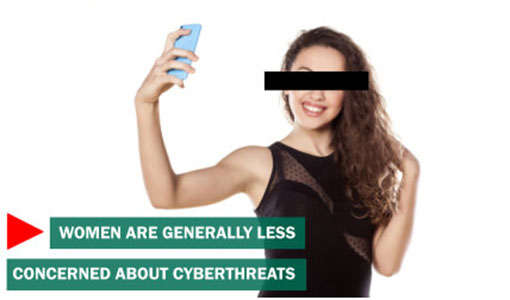 According to the results of a survey carried out by Kaspersky Lab and B2B International, female Internet users are less concerned about protecting themselves against online threats than men.

Of course, this attitude can have dangerous consequences since there is no code of chivalry that would discourage a cybercriminal from preying on women.

Only 19% of women believe they may fall victim to cybercriminals while every fourth man (25%) considers it possible.

This lack of awareness can cause women to pay less attention to protecting themselves against cyberthreats.

When they allow other people (children, friends, colleagues, etc.) to use their main device, 36% of women do nothing to protect their data because they “see no risk”.

At the same time, in the survey it appears that over a 12-month period more men than women faced malware incidents (35% vs 27%), and men were more likely to suffer financial consequences (22% vs 19%).

Typically, men more often spend money on buying special programs designed to clean the system or to protect it in the future whereas women prefer to turn to IT professionals for help.

There are some other threats that men face more often than women. For example, in 2014 cyberattacks targeting users’ financial data were encountered by 47% of men but just 39% of women.

This may be because women are particularly concerned about the security of financial transactions compared with other online activities.

As a result, 59% of men and 64% of women are worried about the risk of online fraud affecting their bank accounts while 46% of men and 51% women feel vulnerable when making online payments.

In addition, female respondents are slightly more worried about someone spying on them via their webcam (41% vs 38%).

“In real life people understand that it’s important to take sensible precautions to protect the things that they value as they go about their day-to-day activities. The same is true online. Following sensible web safety guidelines allows us to greatly reduce the risk of losing valuable data or falling victim to financial fraud,” said Elena Kharchenko, Head of Consumer Product Management, Kaspersky Lab.

Kaspersky internet Security – Multi-Device and Kaspersky Total Security – Multi-Device allow users to feel safe from all types of cyberattacks on all devices, whether they are Windows PCs, Macs or Android devices. In particular, the products integrate Safe Money*, a special technology to protect online financial transactions, and a Webcam Protection* module that informs the device owner about every attempt to connect to his or her webcam.

In addition, the company’s security solutions are easy to use even for inexperienced users.