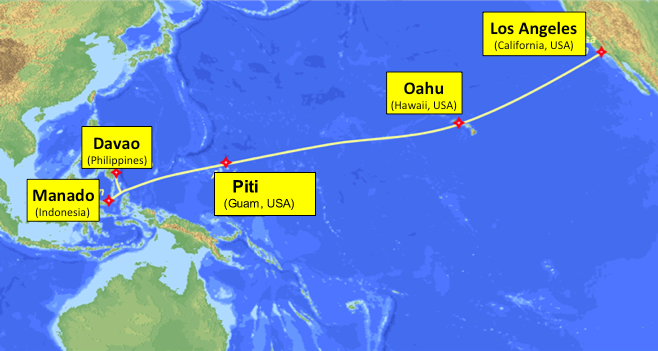 A global consortium of telecommunications companies, formed to build and operate the South-East Asia – United States (SEA-US) submarine cable system, officially announced the start of construction for the landmark project, the first to directly connect Indonesia and the United States. NEC Corporation and NEC Corporation of America are the system suppliers for the US $250 million project that is expected to be completed in the fourth quarter of 2016.

The SEA-US system will link the five areas and territories of Manado in Indonesia, Davao in Southern Philippines; Piti in the territory of Guam; as well as Honolulu (on the island of Oahu), Hawaii; and Los Angeles, California in the continental U.S. The system will be approximately 15,000 kilometers in length, stretched along a unique route and has been designed and engineered to bypass earthquake prone areas in East Asia, thereby providing a strategic diversity in the range of connectivity to transpacific networks with ensured stable connectivity.

The cable system will provide an initial 20 terabit per second (Tb/s) capacity, with state-of-the-art 100 Gigabit per second (Gb/s) technology. This capacity will help to meet the exponentially growing demand for bandwidth between Southeast Asia and North America in unparalleled performance, especially for those two ASEAN countries. With further connectivity using existing and planned submarine cable systems in the region, other countries such as Singapore, Malaysia, Brunei, Papua New Guinea, and Australia can enjoy the benefit of the SEA-US.

Syarif Syarial Ahmad, President Director of Telin stated, “This cable construction is significant as it is one of the biggest milestones for Indonesia’s rapid growth in communications and it demonstrates Telin’s commitment to providing Indonesia consumers with state of the art global infrastructure development. Our objective is now closer with SEA-US given that it is the first cable system with direct connection from Indonesia to USA, where most of the Internet’s content is sourced.”

The frequent use of high bandwidth internet in Indonesia is ranging from business, where video conference is highly utilized in many offices, as well as entertainment, where video and TV streaming have become part of casual activities of Indonesians.

Gil Genio, Globe Telecom Executive Vice President and Chief Operating Officer pointed out that, “The SEA-US project will enable Globe to play a major role in providing superior connectivity for consumers and businesses in the Philippines to connect to the US. Our link-up with the SEA-US cable system will serve the exponential growth of mobile Internet use in our country, enabling the Filipino digital lifestyle and wonderful experience for our customers and businesses.”

He added that, “this development will also benefit the outsourcing and offshoring industry, including major contact centers, business process outsourcing providers, global financial institutions and a host of other multinationals that require very large bandwidth as the Philippines has become the preferred destination for these companies.”

Eric K. Yeaman, Hawaiian Telcom’s president and CEO, said that, “Today’s announcement signals the beginning of a truly vital project that will facilitate economic opportunity and growth for Hawaii’s residents and businesses. Hawaii is no different from the rest of the world in its need and desire for more bandwidth and the SEA-US system will ensure our trans-Pacific capacity needs are met both now and well into the future.”

Robert Haulbook, GTA president and chief executive officer, says “GTA is excited about this consortium. With this system, collectively, we are well positioned to meet the growing demand for increased bandwidth and strengthening our position to enhance overall network redundancy. Guam plays a vital role, and we look forward to SEA-US meeting capacity needs of all users in our areas.”

Naoki Yoshida, General Manager of NEC’s Submarine Network Division said that, “As one of the world’s top vendors of submarine cable systems, NEC is honored to begin construction on this new 100G trans-oceanic submarine cable system that will span nearly 15,000 kilometers. This cable promises to expand connectivity and capacity as well as contribute to the economies of Southeast Asia and the U.S. The construction of this advanced system enables NEC to capitalize on more than 40 years of experience, laying over 200,000 kilometers of submarine cable infrastructure and contributing to worldwide communications. Through this undertaking, NEC will continue to dedicate its strength to the development of telecommunication infrastructure in these regions and other countries across the globe.”