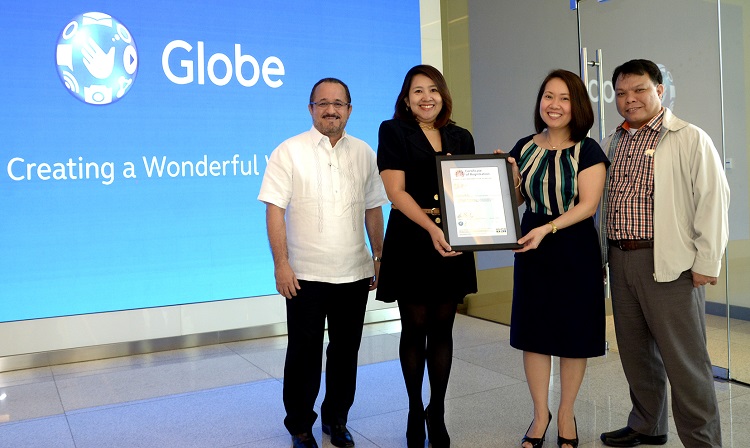 With strategic initiatives to strengthen its readiness in addressing disruptions to its service through business continuity programs well in place, Globe Telecom recently became the first telco in the Philippines to be re-certified in Business Continuity on an enterprise-wide scale.

Globe received from the British Standard Institute (BSI) an ISO 22301: 2012 or the Business Continuity Management System which recognizes anew its robust implementation of best practices on business resiliency, as well as to its management system for enabling clients and stakeholders to understand and prioritize the threats to business using the international standard for business continuity, ensuring that the company is equipped to survive in the event of a major incident or disaster.

“We at Globe underscore the utmost importance of business continuity in our operations, fully aware that our service will be most needed during the occurrence of natural or man-made disruptions. As such, it is an honor to receive an ISO re-certification for our ongoing efforts on business continuity which attests to our preparedness and readiness to meet any form of calamity,” said Globe Chief Financial Officer Albert de Larrazabal, who also oversees business continuity programs for the company.

Key to the re-certification of Globe Telecom is its maturity in the fourth year of implementation of the management system. “Most companies certified to BCM standard especially in other countries only have their main office and a recovery site that are certified. In the case of Globe Telecom, the company has multiple sites all over the country that are certified, which serves as a distinct advantage of the company,” attested BSI Client Manager Beverly Bautista.

The BSI conferred to Globe the re-certification due to its ability to plan, establish, implement, operate, monitor, review, maintain and continually improve a documented management system. The latter requires operating the system through establishing business impact analysis and risk assessment, business continuity strategies, procedures, exercising and testing the business continuity plans, monitoring, measuring and evaluating performance, and improving the system.

Recently, Globe has outlined its plans and initiatives in addressing the effects of a major earthquake hitting Metro Manila, or what is called as “The Big One.” It is also working closely with government institutions such as the Metro Manila Development Authority in proactively preparing its organization in the eventuality of the major temblor affecting the country’s capital.

The world’s first standard organization, the BSI is a founding member of ISO (International Organization for Standardization) and holds a permanent seat on the Council of both ISO and European Committee for Standardization. It is the National Standards Body for the UK. The ISO on the other hand serves as a strategic tool and guideline to help companies tackle some of the most demanding challenges of modern business. Among other important aspects, it also ensures that business operations are as efficient as possible.