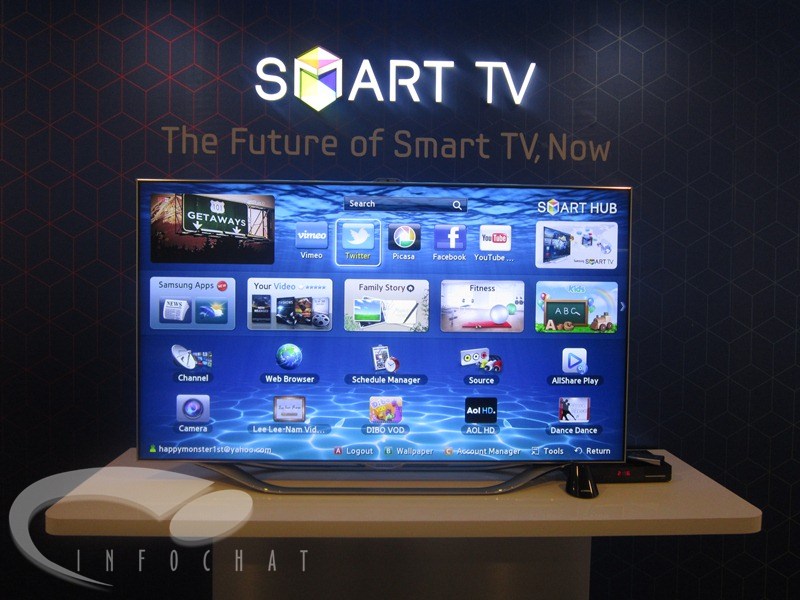 A couple of weeks back, I had the distinct pleasure of attending Samsung Electronics Philipines exclusive Samsung 2012 AV Roadshow. This 2012, Samsung’s TV and AV strategy is built on three pillars: Smart Interaction, Smart Content, and Smart Evolution. The Smart Interaction technology provides a new, more natural and intuitive option for controlling and interacting with the TV. It includes a new Motion Control, Voice Control, and Face Recognition commands. Users can turn the TV on or off, activate selected apps or search for and select content in the web browser – all without touching the remote. This technology is available on Smart TVs such as LED ES800 series, LED ES7500 series and the Plasma E800 series – which are the company’s 2012 flagship models. The Smart Content features a wide-array of premium contents with over 1,500 apps offered worldwide. This ascertains that the Smart TV will be enjoyed by every family member. Samsung also added new exclusive features like the Family Story’s album for organizing and enjoying slide shows of family photos; the Fitness that provides an access to exercise content with the capability of tracking progress; and Kids, which offers child-friendly contents that kids can access and parents can control and monitor. And finally, Samsung’s Evolution Kit that will allow consumers to easily and cost-effectively enjoy the latest technology services on their TV. With a simple slot-in at the back of select 2012 Samsung Smart TV models, consumers can keep pace with rapid advancements in both TV hardware and software—without needing to purchase a new set every year. Weeks later after the roadshow, I got an invitation from Samsung Philippines to try and experience their SmartTV LED 55-inch Series 8 ES8000 up close by spending one night at Maxims Hotel in Resorts World Manila. The day started with a demo from Samsung engineers, showing me the new features of the TV, more particularly the motion sensor feature, voice control, Smart Hub and facial recognition. The motion sensor feature was made possible due to a built-in camera attached to the TV. It takes a while before the TV was able to recognize my presence but once it has recognized me, everything was a breeze. The cursor actually follow my hand gestures and all I have to do is to close my hand which tells the TV that I have made a selection. I encountered a little difficulty with the voice control feature as (I think) it needs to be accustomed to my voice. Saying “Hi TV” turns on the TV. I tried increasing the volume, lowering the volume, going to different menus like the SmartHub with no problem at all. The only problem I encountered was when I attempted to change channel – my command was to change to channel 13 but I was brought to channel 30. It’s either I was not able to say it clearly or it’s because the TV was on and the voice of the TV somewhat distracted my command. The SmartHub feature is almost the same as the first Samsung TV I tested except that it comes with three new signature services – Kids, Fitness and Family Story. The Samsung Kids application brings together home entertainment with fun and beneficial educational programs, Samsung Fitness lets you maintain your exercise routines in the comfort of your own home, and Samsung Family Story ensures that your precious family moments are not only saved but easily shared on your Smart TV. The Slim LED ES8000 is also a 3D TV. We were provided with 3D glasses but unfortunately there was no 3D movies available this time. The next feature I tried was the facial recognition feature. This feature basically allows the TV to use my appearance as password to access my Facebook, Twitter and other web applications. Since it comes with a camera above the TV, all I need is to create an account and then I took a snapshot of myself. I tried accessing my Twitter account and the TV was able to recognize that I am the rightful owner of the account. One funny experience during my stay was when I was toying with the voice command. I was surprised when I commanded ‘Bye TV’ and suddenly the power went off. My next command was “Good Morning TV” and what do you know, the power was on. I tried clapping my hands twice and guess what, the power went off. I tried clapping my hand once and again the power was on. I was so amazed with this TV that it can actually execute various commands and sounds only to find out that my youngest daughter was in bed actually operating the TV via the remote control. Overall, I would say the Samsung 55-inch Series 8 ES8000 is revolutionary with the new features. Gone were the days when a TV is a simple TV. This appliance is changing the whole meaning of the word entertainment. Not only can you enjoy your favorite TV programs and movies, you can also communicate / share your experience with your friends via social networking applications due to its web connection capability. I can’t wait to see what new features can they think of in the years to come. (Article written by Jerry Liao)