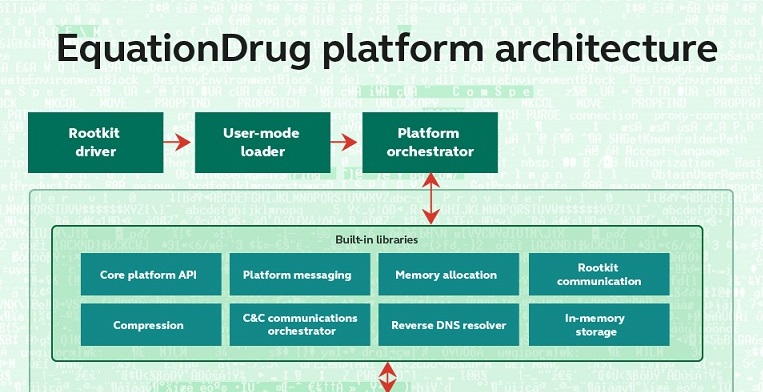 This new trend was confirmed during a detailed analysis of the EquationDrug cyberespionage platform.

Kaspersky Lab specialists found that, following the industry’s growing success in exposing advanced persistent threat (APT) groups, the most sophisticated threat actors now focus on increasing the number of components in their malicious platform in order to reduce their visibility and enhance stealth.

The latest platforms now carry many plugin modules that allow them to select and perform a wide range of different functions, depending on their target victim and information they hold. Kaspersky Lab estimates that EquationDrug includes 116 different plugins.

“Nation-state attackers are looking to create more stable, invisible, reliable and universal cyberespionage tools. They are focused on creating frameworks for wrapping such code into something that can be customized on live systems and provide a reliable way to store all components and data in encrypted form, inaccessible to regular users,” explained Costin Raiu, Director of Global Research and Analysis Team at Kaspersky Lab.

“Sophistication of the framework makes this type of actor different from traditional cybercriminals, who prefer to focus on payload and malware capabilities designed for direct financial gains,” he added.

Other ways in which nation-state attackers differentiate their tactics from traditional cybercriminals include:
• Scale. Traditional cybercriminals mass-distribute emails with malicious attachments or infect websites on a large scale, while nation-state actors prefer highly targeted, surgical strikes, infecting just a handful of selected users.
• Individual approach. While traditional cybercriminals typically reuse publicly available source code such as that of the infamous Zeus or Carberp Trojans, nation-state actors build unique, customized malware, and even implement restrictions that prevent decryption and execution outside of the target computer.
• Extracting valuable information. Cybercriminals in general attempt to infect as many users as possible. However they lack the time and storage space to manually check all the machines they infect and to analyze who owns them, what data is stored on them and what software they run – and then to transfer and store all potentially interesting data.
– As a result, they code all-in-one malware stealers that will extract only the most valuable data such as passwords and credit card numbers from victims’ machines. This activity could quickly bring them to the attention of any security software installed.
– Nation-state attackers on the other hand have the resources to store as much data as they want. To escape attention and remain invisible to security software they try to avoid infecting random users and instead rely on a generic remote system management tool that can copy any information they might need and in any volumes. This could, however, work against them as moving a large volume of data could slow down the network connection and arouse suspicion.

“It may seem unusual that a cyberespionage platform as powerful as EquationDrug doesn’t provide all stealing capability as standard in its malware core. The answer is that they prefer to customize the attack for each one of their victims,“ said Raiu.

“Only if they have chosen to actively monitor you and the security products on your machines have been disarmed, will you receive a plugin for the live tracking of your conversations or other specific functions related to your activities. We believe modularity and customization will become a unique trademark of nation-state attackers in the future,” he added.

EquationDrug is the main espionage platform developed by the Equation Group. It has been in use for more than a decade although it is now largely being replaced by the even more sophisticated GrayFish platform.

The tactical trends confirmed by the analysis of EquationDrug were first observed by Kaspersky Lab during its research into the cyberespionage campaigns Careto and Regin, among others.

Kaspersky Lab products detected a number of attempts to attack its users with exploits used by the Equation Group in their malware.

Many of these attacks were not successful due to Automatic Exploit Prevention technology which generically detects and blocks exploitation of unknown vulnerabilities. The Fanny worm presumably compiled in July 2008 and being a part of the Equation platform, was first detected and blacklisted by our automatic systems in December 2008.