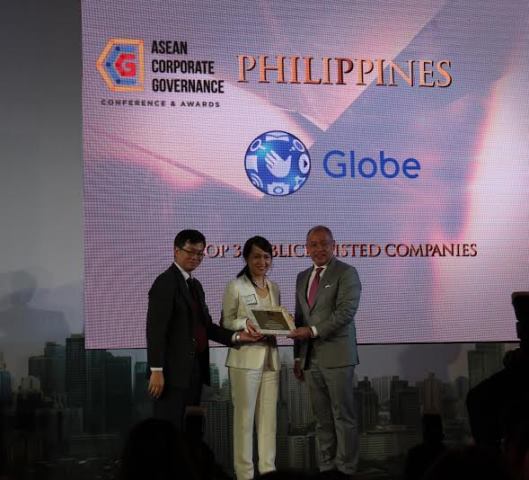 “The two awards further bolster our commitment to uphold high standards of corporate governance, particularly in terms of promoting accountability, transparency and integrity in all aspects of the business, which is also evidenced by the remarkable business growth and increased shareholder confidence that such strategy has generated for the company,” said Globe President & CEO Ernest Cu. He noted the company has made significant headway over its rival in postpaid and mobile data businesses in terms of consolidated mobile revenue market share, with the Globe brand registering a market share of 34.5% compared with its main competition. Globe share prices also reached a record high of P2,720/per share in June this year, a 55% jump compared with P1,750/share at the beginning of the year, Cu said. Awarding ceremonies were held November 14, 2015 at the Manila Polo Club.

Envisioned to be a platform that inspires and educates both public and private companies about good governance, the ASEAN Corporate Governance Awards puts emphasis on the ASEAN Corporate Governance Scorecard (ACGS) and the best practices that it promotes. Following the global financial crisis that started in 2007, the ACMF reexamined the effectiveness of existing capital market incentives and financial regulatory structures with the goal of promoting good governance. The ACGS was developed to assist in evaluating publicly listed companies. The ACGS was created in 2011 as one of the initiatives in preparation for the ASEAN economic integration beginning 2015.

The scorecard specifically presents a list of questions used to rate a company’s governance practices based on the principles of corporate governance developed by the Organization for Economic Cooperation and Development. Six countries namely Indonesia, Malaysia, Philippines, Singapore, Thailand, and Vietnam volunteered to have their publicly listed companies assessed by the ACMF using the scorecard, to have a common governance standard which makes publicly listed companies comparable with each other and to promote ASEAN as an asset class.