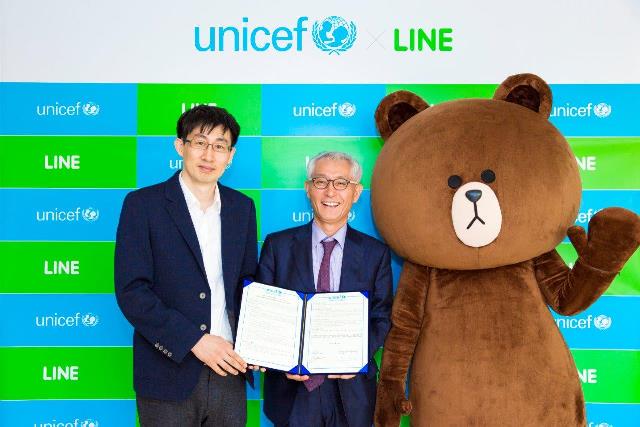 Jong Nam Oh, Executive Director of The Korean Committee for UNICEF and Jung-ho Shin, Chief Executive Officer (CEO) of LINE Plus Corporation and Chief Globalization Officer (CGO) of LINE Corporation, held “UNICEF-LINE Global Partnership Signing Ceremony” n Seoul on the 13th to agree on the sponsorship partnership to support the children of the world.

UNICEF-LINE partnership has been strategically led by the UNICEF global headquarters with 11 countries participating simultaneously. The 11 countries include Korea, Japan, Taiwan, United States, France, Germany, Thailand, Indonesia, Malaysia, Spain and. The Korean Committee for UNICEF signed the alliance representing all countries at the Global Partnership signing ceremony it hosted.

Through this strategic partnership, UNICEF and LINE aim to create a brand value with competitive power and raise funds effectively. LINE plans to use character licensing by producing and selling plush toys and mugs of its flagship character, Brown, with the UNICEF logo. In addition, LINE will help fundraise by developing and selling digital LINE stickers. LINE’s virtual coin called “Free Coin” will contribute to the fundraising as well. It is anticipated by LINE that various PR and marketing activities will raise the fund of minimum of KRW 3.3 billion in 3-years.

Jong Nam Oh, the Executive Director of the Korean Committee for UNICEF, said “It is highly meaningful that the Korean Committee participated as a representative for the partnership between UNICEF and LINE, a global corporate and a messenger app used in 230 countries worldwide.” He added that “The strategic partnership between UNICEF and LINE is expected to enhance brand value, produce competitive products, and moreover, create synergy to increase sponsoring opportunities for UNICEF using LINE’s digital platform.”

Jung-ho Shin, CEO of LINE Plus Corporation and CGO of LINE Corporation commented, “LINE has been constantly evolving to become the world’s leading mobile life platform. I hope this partnership brings excitement to all LINE users by being able to take on an important role to support the children in developing countries.”

The funds which will be raised through the global partnership between UNICEF and LINE will be used for relief for children of developing countries.

Next Post New Microsoft OneNote is still for free