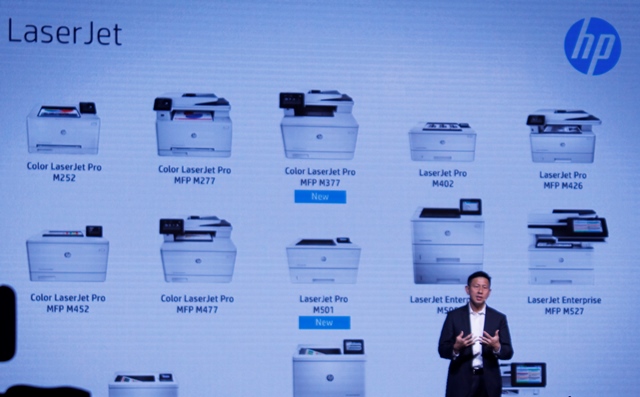 During the company’s official launch last Wednesday (April 6, 2016), HP Inc. yet again marked another milestone as they revealed their newest innovation when it comes to their LaserJet printers; a new set of printers which promotes leaner, faster, and smarter printing.

HP’s newest line of LaserJet printers promises to help its customers with small businesses produce energy efficient, fast speed, document quality, and best value files; especially on black and white printing. The new set of printers is equipped with Original HP Toner cartridges with JetIntelligence technology which is considered as another special feature which can be found in the LaserJet printers. There were two types of LaserJet printers that were launched, namely the HP LaserJet Pro M501 series and the HP Color LaserJet Pro MFP M377 series. HP Laser Jet Pro M501 is a single function and monochrome printer that fits the needs of small and medium sized businesses. The said printer can produce up to 6,000 pages per month, offers the fastest first page out from ready and sleep, and has the lowest energy consumption in its type.

The HP Color LaserJet Pro MFP M377 series, on the other hand, is a multifunction color printer that suits small and medium enterprises. It can produce up to 4,000 pages per month, offers fastest first page out from sleep, fastest duplex printing, and lowest energy consumption in its type. However, for both HP LaserJet Pro M501 series and HP Color LaserJet Pro MFP M377 series, price range and release dates in the Philippines will be available at a later date,